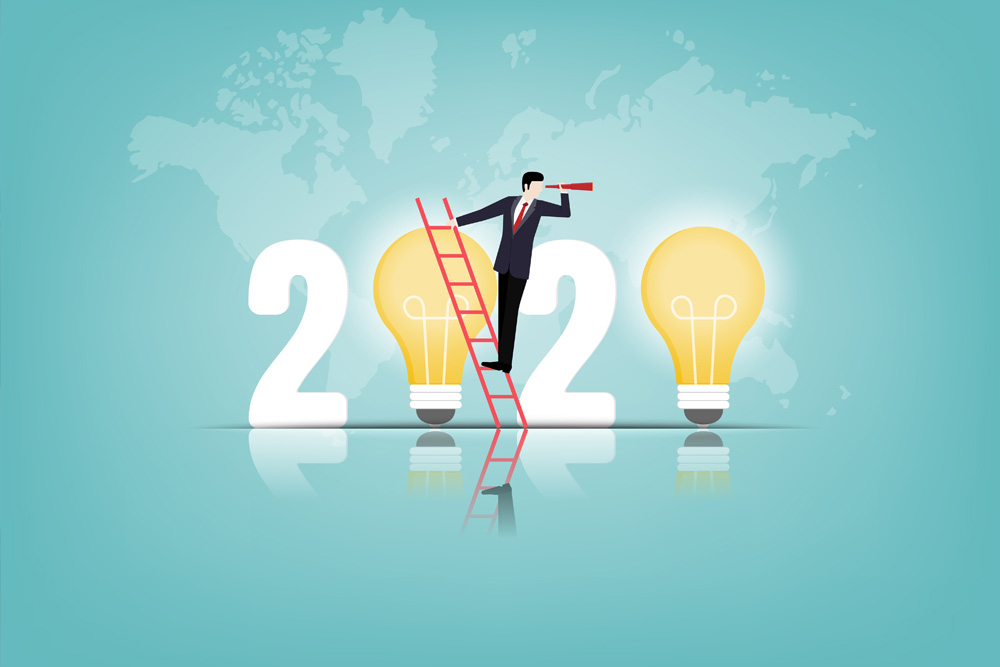 Investor anxiety morphed into a panic in February, ending the eleven-year equity bull market. Financial markets were rattled by the latest headlines surrounding increased geopolitical tensions, the COVID-19 pandemic, and an oil price war, with investors around the world attempting to gauge the severity of the impact on global growth. We now find ourselves in the midst of a pandemic, with a recession looming. However, it is not all bad news, and as always, there are encouraging signs and silver linings to be found.

The worldwide spread of COVID-19 first gained world attention in December as its devastating impacts were felt in the Chinese provinces of Wuhan and Hubei. The subsequent rapid spread first hit South Korea and Iran, then most notably Italy, followed by Spain, Germany, France and the United Kingdom. The virus quickly spread to North America, with New York becoming the new global epicentre. The spread of the COVID-19 virus has riddled the financial markets with uncertainty. Markets are now pricing in a recession, as countries around the world have implemented a strict social and non-essential business lockdown that will have a serious and wide-reaching effect on the global economy.

THE ELEVEN-YEAR BULL MARKET CRASHES TO A HALT.

In the last week of February, a short month ago, North American equity markets were at all-time highs. As COVID-19 cases surged, amplified volatility entered the market and resulted in the S&P/TSX index experiencing four trading sessions with a daily loss greater than 7%. This triggered circuit breakers on the exchange, a safeguard put in place after the stock market crash known as Black Monday (October 1987). These breakers act to calm the market in times of extreme pressure. 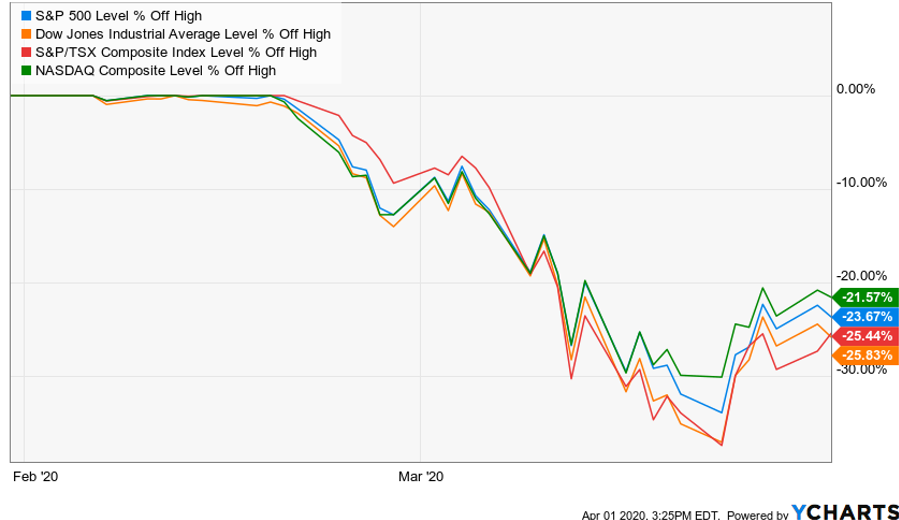 Since the market peak in February, the Canadian benchmark plunged and lost 25.4% of its value. U.S equity markets experienced similar news as the S&P 500 shed 23.7% of its value, while the Dow Jones Industrial Average gave up 26% of its gains, as of April 1st. A popular market volatility gauge is the VIX index, which measures volatility. This hit an all-time high of 82.7 in March, well above its usual level of 12-18. To put the level of volatility in perspective, November 2008 was the last time the VIX has risen to levels this high.

The fear of a pandemic drove investors to the normal safe-haven assets of government bonds, which drove yields to new lows. The lower rates, weaker growth expectations, and central bank easing added to the southward move in fixed income assets.

IF IT WEREN’T COMPLICATED ENOUGH, AN OIL DISPUTE ADDED FUEL TO THE FIRE.

Adding to the uncertainty, the ongoing dispute between Saudi Arabia and Russia led to Saudi Arabia flooding the global oil market with crude. The combination of an increased supply and a reduced global demand amid travel restrictions and social distancing resulted in global crude prices falling 30%. Oil-based countries have been hit the hardest as WTI has fallen to a low of $20/barrel; the shock to the Canadian economy and energy sector has been particularly worrisome.

Prime Minister Trudeau is preparing a bailout package for the oil and gas industry, but details have not been disclosed as of this writing.

THE RESPONSE FROM GOVERNMENTS HAS BEEN SWIFT AND SIGNIFICANT.

Across the world, central banks reacted to provide liquidity and stimulus to the economy:

In addition to the rate cuts, central banks around the world have re-introduced the quantitative easing (QE) programs that were first introduced in 2008. Here at home, Canadian banks were given the power to lend $214 billion. The US FED introduced a $700 billion dollar QE program, the Bank of England implemented a £200-billion bond buyback program and the ECB introduced a €750-billion Emergency Pandemic Program.

On top of the dramatic monetary stimulus, fiscal policies have changed as governments around the world are providing various forms of economic relief.

WHILE THE DETAILS ARE CHANGING DAY BY DAY, HERE ARE A FEW KEY POINTS FROM CANADA'S FISCAL RESPONSE, KNOWN AS “CANADA’S COVID-19 ECONOMIC RESPONSE PLAN:

The good news: these measure should provide cash relief to Canadians very soon, and the increased stimulus measures should provide relief to the Canadian economy later this year. You can find the details here: https://www.canada.ca/en/department-finance/economic-response-plan.html

DOWN SOUTH, THE UNITED STATES IS TAKING SIMILAR MEASURES.

We must always pay attention to what is occurring in the United States, as our two economies are so intertwined. In the US, the impact on the healthcare system is amplified. The impact of physical distancing and travel restrictions on the economy has been dramatic, with estimates that the unemployment rate could hit as high as 30%.

The United States Fiscal Response has come to the tune of $2 Trillion:

The silver lining is that before this increased volatility, the U.S economy was on a solid foundation. Consumer confidence remained firm even amongst the trade tensions last year.

BUT, THERE ARE ENCOURAGING SIGNS AND WE’D LIKE TO END ON A MORE OPTIMISTIC NOTE:

We truly are living in unique times; however, in times like these we must take comfort in knowing that this will likely be short-lived. As an entire society, we will get through this, and we will learn, grow and become better because of what we are currently experiencing. On behalf of the entire Ciccone McKay team we hope you and your families all stay well and safe.

If you have any questions regarding the market commentary, please do not hesitate to call 604-688-5262. To read more, please visit Ciccone-Mckay.com https://www.ciccone-mckay.com/blog.html