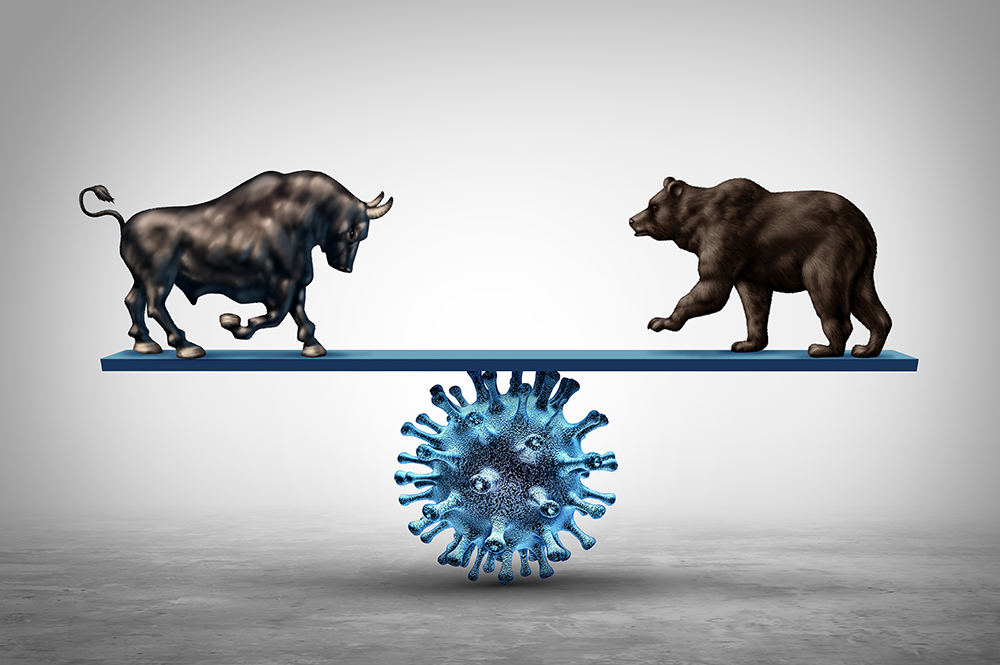 2020 continues to baffle us all

Standing at the half-way point, its fair to say that 2020 is shaping up to be an unprecedented year for stock markets. Following a turbulent first quarter where we experienced the fastest 30% decline in the S&P 500’s history - primarily due to the COVID-19 global lockdowns - the second quarter did not disappoint.

At the outset of the quarter much of those losses had been quickly recouped as stock markets kicked into recovery mode with all major North American indices rising, led by the NASDAQ which hit all-time highs during the period, passing the 10,000 mark for the first time.

The S&P 500, a broad measure of the U.S market, ended the quarter gaining more than 20%, for the best quarter since 1998. By June it had regained a significant portion of the total losses suffered earlier in the year.  According to DealBook, the last time there was a more significant quarter-to-quarter swing was in 1932.

The big household equity names listed within the S&P 500 were not the only winners over the second quarter. The Russell 2000 index, which measures the performance of small-cap stocks in the U.S., outperformed the broader market. Small-cap names tend to be more sensitive to changes in domestic economies than the larger multinational names. As local economies opened during the second quarter, it was no surprise that the small-cap names began to rally, though still remain in negative territory year-to-date.

Energy prices remain a weak point for the Canadian market 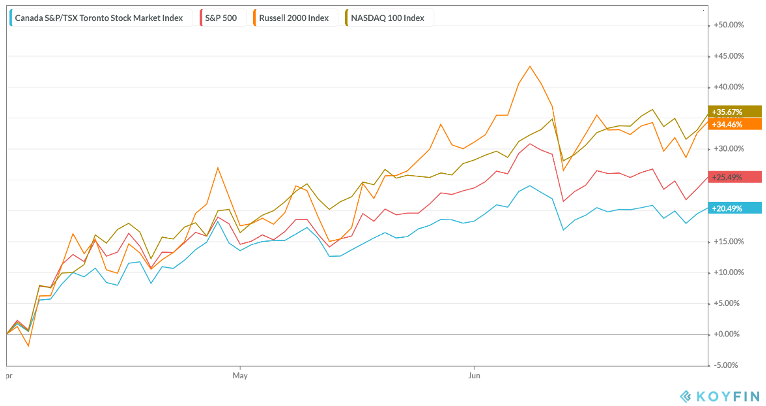 The S&P/TSX, a broad measure of the Canadian market, also moved upward during this period, led by the technology, industrials, and materials sectors, with increasing gold prices lifting the latter. Energy prices, however, remain a weak point for the Canadian market due to the lower prices for oil following the OPEC+ stand-off between Russia and Saudi Arabia earlier in the year.

On the fixed income side, with continued concerns over the pandemic and increased trade tensions, yields on the U.S. 10-year government bonds fell below 2.00%, and the equivalent Canadian government yield hit a low of nearly 1.40%. Yields in Europe and Japan were already negative, and they fell further to new lows. Due to the inverse relationship between bond yields and price, these falling yields resulted in global bond prices inching higher during the period.

Why is the stock market rallying, when the economy is so weak?

Many economists and pundits are confused with the rally in equity markets given that the broader economic landscape remains weak; however, it is essential to note that equity markets are forward-looking indicators, which means the performance of the equity market is a reflection on where investors think things are headed, rather than where it is, or has been over a set time.

This positive view comes, in part, from the continued government stimulus and monetary response from countries around the world. There are growing signs that the increased stimulus is helping pick up the economy. Additionally, news on the collective effort by countries to combat the virus in terms of vaccines and other treatments is also helping to lift the forward outlook. Although no vaccine has been confirmed, the news is trending positively. Furthermore, many countries, led by Canada, have seen the flattening or downward trend in their infection curves, which has resulted in countries loosening their containment measures in specified phases.

Case counts explode around the world, most notably for our southern neighbours

However, amid the positive direction of the markets, there is still so much uncertainty surrounding the coronavirus crisis and where it is headed. New cases are now rising in the United States, Brazil, Australia, and France. In the U.S., new COVID-19 cases passed a single-day record of 60,000 (at July 15th 2020). The uptick in cases has forced states like California, New York, Florida, and Texas to revisit their reopening plans, which include the closure of beaches, bars, indoor restaurants, and theatres.

Job numbers are up, despite otherwise grim financial data

Despite this negative backdrop, June showed signs of life for the Canadian economy by adding 300,000 jobs as lockdown measures were scaled back within the country. Furthermore, RBC, which uses anonymized credit card data to track spending, showed consumer spending starting to recover last month. Except for Vancouver and Calgary, housing showed signs of stabilization and lower borrowing costs are also providing relief to the consumer. Small business sentiment improved slightly in the second quarter and Canadian PMI, a forward-looking indicator for the state of the economy, increased to 47.8 from 40.6, just shy of the 50 mark which indicates expansion within the manufacturing sector. The caveat with this positive economic news is that most of these levels are still well below their normal levels or even near historic lows.

The Bank of Canada continues its focus on liquidity and support to the economy maintaining the view that the outlook for the second half of 2020 remains very cloudy. As such, the BoC’s asset purchase program remains open as it remains committed to expanding its balance sheet to provide the needed liquidity.  There is no immediate interest rate announcement scheduled for the BoC.

The drop in unemployment from 13% to 11% was primarily due to the decline in temporary unemployment; however, the number of Americans who have been permanently laid off increased by 600,000 jobs.

The Fed has begun to slow its asset purchasing program slightly, but QE remains open. The Fed will also continue to expand its balance sheet, alongside new stimulus programs. Keeping interest rates near zero will provide additional stimulus to the economy.

As always, please reach out if you would like to arrange time to discuss your own financial portfolio. We love to talk to you. Please call us at 604-688-5262 or email us at info@ciccone-mckay.com.