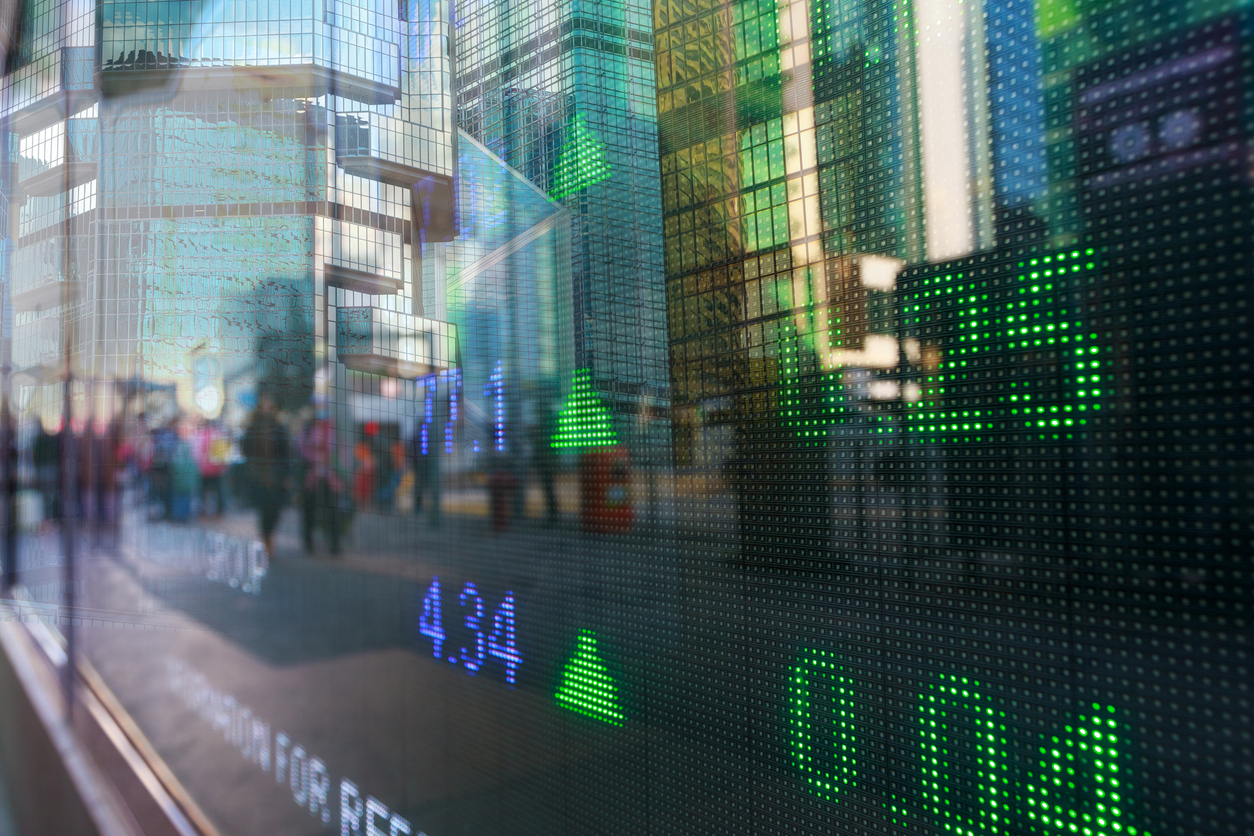 All these factors allowed market participators to look beyond the rise in COVID-19 cases, helping the S&P 500 hit all-time new highs in late July. The positivity in the market continued well into August as similar trends transpired. In addition, there was ongoing support from global central banks, particularly the U.S. Federal Reserve. 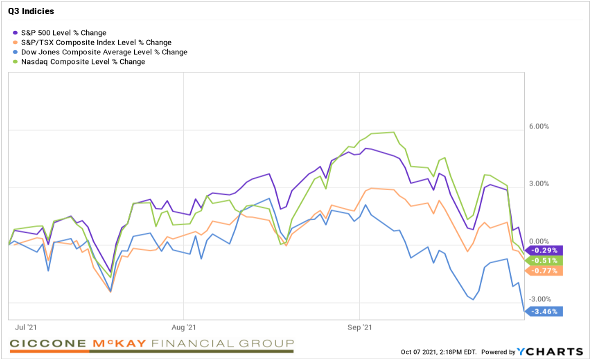 However, the tone changed in September. Many positive catalysts that had been supporting the stock market early in Q3 began to fade. Corporate commentary turned more cautious as supply chains issues became apparent across multiple industries. This, in turn, affected investor sentiment on future corporate earnings as costs inflate.

Moreover, volatility was compounded by the news that Evergrande, China’s second-largest property developer, would default on debt payments. Because of the fear of a financial contagion, stocks in late September started to sell off, and the S&P suffered its first 5% pullback in more than a year.

Markets stayed volatile into the end of Q3. The Fed announced it would begin to reduce quantitative easing – the program of trying to increase liquidity in the financial system – before year-end. Meanwhile, political back-and-forth in the U.S. created greater uncertainty as both Republicans and Democrats flirted with the deadline on extending the debt ceiling.

Major economies’ Q3 economic indicators, most importantly Gross Domestic Product (GDP), will be published at the end of October. Economists are staying cautious with their expectations. Not surprising, as the emergence of the COVD-19 Delta variant, labour issues, supply shortages, and global-supply-chain bottlenecks have all slowed economic activity and caused an inflation spike.

Here’s the issue. Demand has recovered, yes. But supply chains have been disrupted and are slower to recover. This has resulted in a cascading effect throughout the economy, with the congestion impacting retailers and businesses of all sizes. The backlog touches every aspect of the globe, from ports struggling to process and move cargo, to ships facing short supply of everything from cars to computers. All this has sparked price increases across the board. Manufacturing also slowed toward the end of the quarter, due to labour shortages and increased delivery times for materials.

Nevertheless, optimism is high among manufacturers and business owners. They view these issues as transitory. Shortages, they believe, will begin to ease as employees return to work.

As noted, economists are more cautious. Still, according to the International Monetary Fund (IMF), global growth projections for 2021 and 2022 are 6% and 4.9% respectively. If we do hit the 6% global growth mark, it will be the first time since 1973. But keep in mind that this would be off a very low base.

Canada saw headline inflation, that is, the raw inflation figure reported through the Consumer Price Index (CPI), rise to the highest number in almost two decades. Inflation clocked in at 4.1%, up from 3.7% in July. Price growth accelerated for food and energy (2.7% and 20.7%). Core items were also stronger than in July, supported by the elevated accommodation expenses and transportation costs. Overall, last year’s weak prices continued to be the bias for inflation rates in August. However, if we look through the headline inflation numbers, prices were up 2.3% (annualized) from pre-pandemic levels. The Bank of Canada was one of the first to taper its asset purchases and will stop adding to its balance sheet as the year ends.
Canadian housing calmed down considerably towards the end of the summer. This has taken the pressure off some property values across many parts of the country, though home prices are still rising. Economists expect further moderation, as affordability issues are becoming an issue for buying. Nevertheless, widespread price declines aren’t expected. The tight demand-supply conditions in most major markets continue to provide protection against any major price correction.

In Canada, we see the impact of global trends on our own business sector. Supply-chain disruptions and labour shortages are affecting recovery, with smaller businesses feeling the most impact.

According to a Stats Canada survey, rising input costs, labour shortages and transportation costs are some of the biggest obstacles facing Canadian business owners. For example, small businesses need to provide higher wages to attract and retain workers. Small businesses are now offering non-wage benefits, like bonuses and flexible work schedules, to compete with larger firms’ offerings. With such trends likely to persist, it looks like they’ll have to continue doing so. At the same time, the unprecedented COVID-era government support isn’t going to last. Small businesses, which make up 40% of Canadian private GDP, will be forced to navigate these tough waters on their own.

As the recovery continues, reliance on policy support will lessen, as the consumption of services will likely increase, as companies increase business investment and rebuild capacity as trade begins to flow again. Over the next few quarters, supply chain bottlenecks and increased labour shortages could continue to generate upward pressure on prices. Economists do expect capacity and workers to return, and these impediments will fade.

If you would like to learn more, please do not hesitate to email or call us at info@ciccone-mckay.com and 604-688-5262