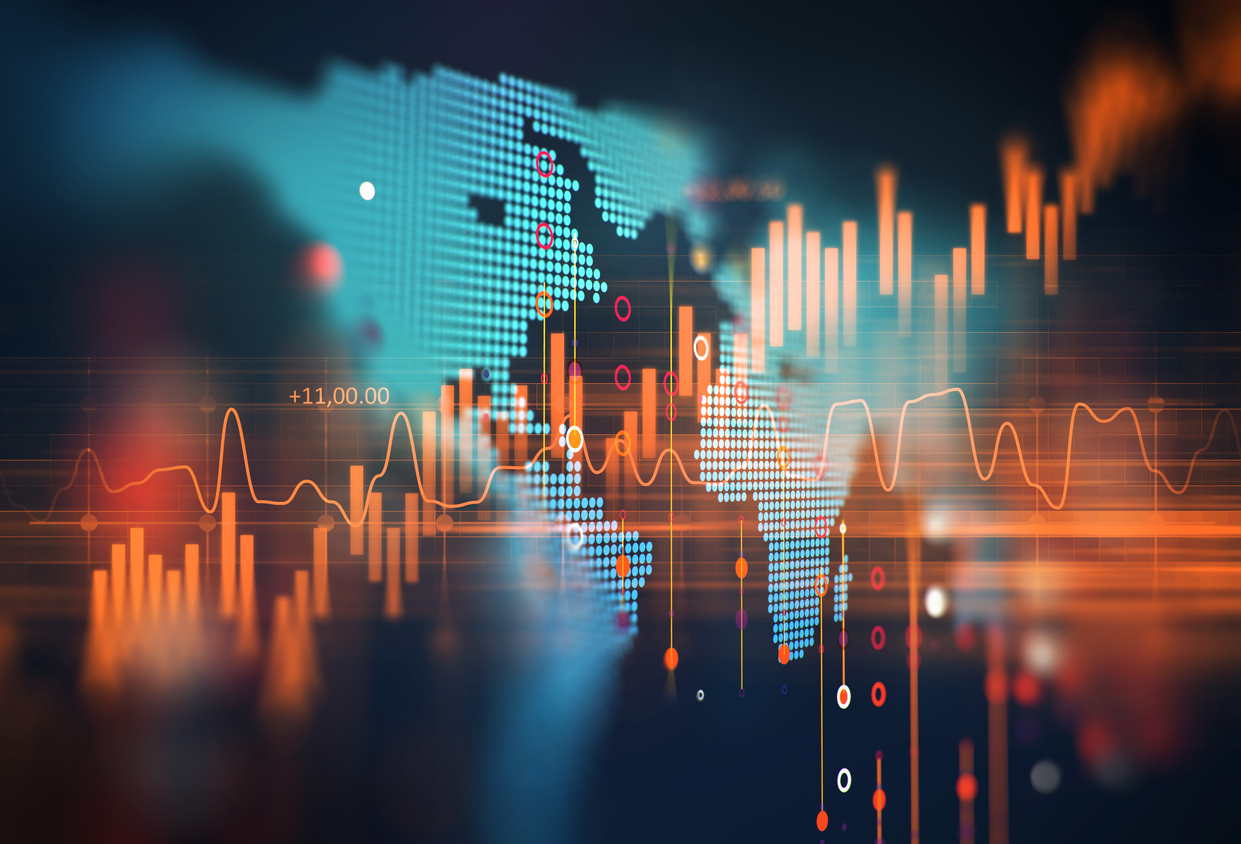 At year-end the highly transmissible Omicron started its global spread; global central bank tone was more hawkish as weight was placed on rising inflation and reducing the slack in the economy rather than Omicron risk. The Bank of England became the first central bank to raise rates, while the Federal Reserve sets to raise rates in 2022. The December Purchasing Managers’ Indices (PMI) in the United States, Eurozone and United Kingdom showed the service sector losing some of its momentum from earlier in 2021.

Manufacturing sentiment remained strong despite widely felt price and supply constraints. The December manufacturing PMI indicated healthy expansion. Markets reflected the hopeful news from the U.K. and South Africa about the new variant not being that severe a disease. As a result, developed economies continued their recovery – though fears of further shutdowns linger – and equity markets rallied. Fixed income finished the year flat.

Gross Domestic Product (GDP) rose 0.8% in October as the Canadian economy began to recover from supply-chain disruptions. Preliminary estimates show output possibly having grown another 0.3% in November. Part of the reason for underperformance was likely the impact of heavy flooding on British Columbia’s transport capacity. And, inevitably, Omicron continues to be a major point of uncertainty for the economy.

The re-imposition of certain restrictions will hinder growth over the short term. Economists expect this will add to the slowdown of supply chains and increase negative impact on the manufacturing sector. Still, the many Canadians getting vaccines and boosters, along with extended government benefits, should somewhat ease threats to the economy. Final Canadian GDP numbers for Q4 2021 will come out sometime in the next couple of weeks; the Royal Bank of Canada (RBC) forecasts a growth tracking of 6.5%.

The Consumer Price Index (CPI) stayed static at 4.7% in November (RBC, 2021), matching what most experts had envisaged. Higher energy prices contributed to about ¼ of the inflation rate. Food prices increased 4.4%, the highest level since 2015 (RBC, 2021).

With the increase in Omicron cases plus BC flooding, economists expect further price uncertainties over the next while. Additionally, the labour market in Canada is growing rather tight. Increased demand means inflation will likely stay higher in the coming months. RBC predicts that, as Q2 2022 draws near, the Bank of Canada will begin raising rates.

President Biden signed the Infrastructure Investment and Jobs Act, a much-anticipated bipartisan bill aimed at deploying $1.2 trillion into American infrastructure. However, Biden’s highly-contested bill did not win a full majority in the Senate. Despite this, and the loss in additional spending, economists in the U.S. are confident the private sector can carry growth forward into 2022. Strong financial asset performance (equities) and real estate have pushed liabilities to the lowest levels since 1973 (J.P. Morgan, Monthly Asset Review).

However, the big story in the U.S. this past quarter was increased inflation – and how the Federal Reserve and its chairman, Jerome Powell, might react. CPI hit 6.8% year-over-year, the highest it has been in nearly 39 years, while unemployment continued to fall, reaching levels of 4.2%.

In recent statements, the Fed has set the stage for a hawkish pivot as it accelerates tapering of quantitative easing (QE). Believing that inflation is no longer transitory, the Fed says it expects three rate hikes next year. Such guidance makes clear that the Fed has met some of its inflation mandate. The Fed will begin raising rates when labour falls in line with what it deems to be maximum employment. Though the Fed’s new stance signals it may react earlier than thought, 150 basis-points (BPS, a unit of measure for interest rates) is the consensus estimate for an increase in interest rates over a two-year period.

For Europe, Russia’s gas supply is proving to be unreliable. Not having other adequate energy options, Europe is as a result seeing sharp rises in gas and electricity prices. And high energy prices are a significant addition to inflation.
In the U.K., the CPI hit 5.1% year-over-year and unemployment hit 4.2%. The further tightening of labour and price increases forced the Bank of England to react: It raised interest rates by 0.15%. Despite the spread of Omicron, the European Central Bank announced it would end the emergency purchase program – its version of QE – in March (J.P. Morgan, Monthly Asset Review).

In the fourth quarter, the People’s Bank of China (PBOC) showed more of a dovish stance, cutting its Reserve Requirement Ratio by 50 BPS. The PBOC also lowered its lending rate to support small enterprises (JP Morgan, Monthly Asset Review). China’s stance is an interesting contrast with the rest of the world raising rates; however, developing countries like China need to maintain their growth projections. As such, developing countries central banks tend to help spur growth when economic prospects are slower.

In 2021, Chinese equities significantly underperformed that of their global counterparts; however, with the added support from the PBOC, JP Morgan foresees better performance of China’s equity market in 2022. 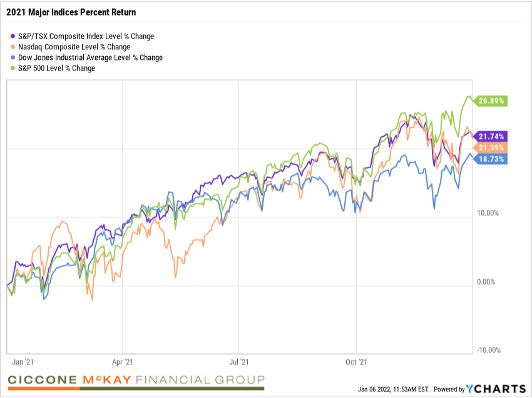 As noted, 2021 ended with news of Omicron’s fast-moving global spread. Nevertheless, for the third consecutive year major stock indices closed the year at record highs. The S&P 500 returned 27% and hit 70 all-time highs. The Dow Jones Industrial Average gained 19% and the high-flying NASDAQ returned 21%. In all, this is the best three-year performance by the three U.S. major indices since 1999. Here at home, the S&P/TSX had a solid year return, returning 21.74%. 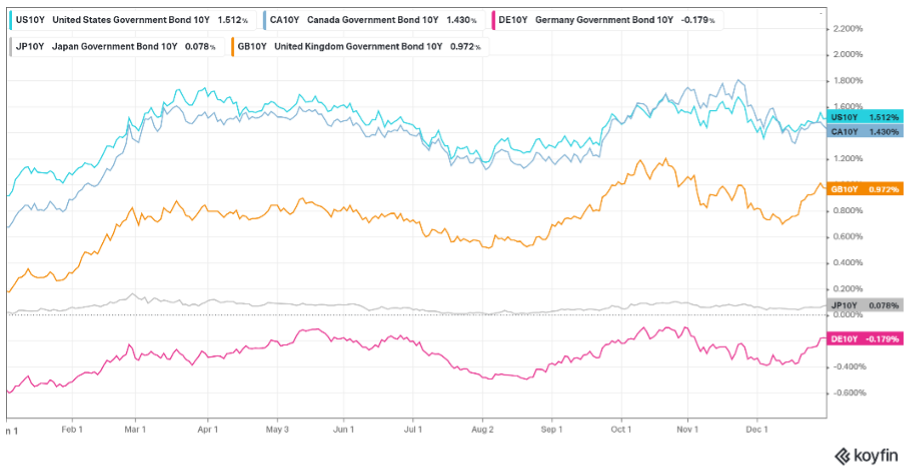 Global 10-year yields gained considerably over the year, thanks largely to the recovery by world economies from the bottoms of 2020. Additionally, 2021 saw inflation increase, which helps raise bonds yields as investors demand higher yields to compensate for the inflation risk. As we enter 2022, the outlook in fixed income is changing rapidly, as central banks look to combat tight labour markets and increased inflation.

In 2022 reliance on policy support will decrease as consumption of services increases. With trade beginning to flow again, companies will intensify business investment and rebuild capacity. Supply-chain bottlenecks and increased labour shortages could continue to generate upward pressure on prices. All this will occur as the world finds ways to co-exist with COVID.