Inflation continues to be the story

With prices declining across every major asset class, the first half of 2022 proved challenging for all market participants.

Why all the drops? Markets are reacting to the aggressive tone change by central banks to combat inflation, which up to this point the banks haven’t been able to control. Food and energy prices keep increasing, COVID-19 continues to hurt supply chains, and the war in eastern Europe rages on. About all economists and strategists can do is scratch their heads as they anxiously wait for markets to stabilize.

Here’s the reason many economists and strategists are having difficulties with future outlooks. Inflation causes more restrictive central bank policies, as well as tightened financial conditions. This year’s inflation surge has caused central banks to switch the tone on inflation from transitory to hawkish. 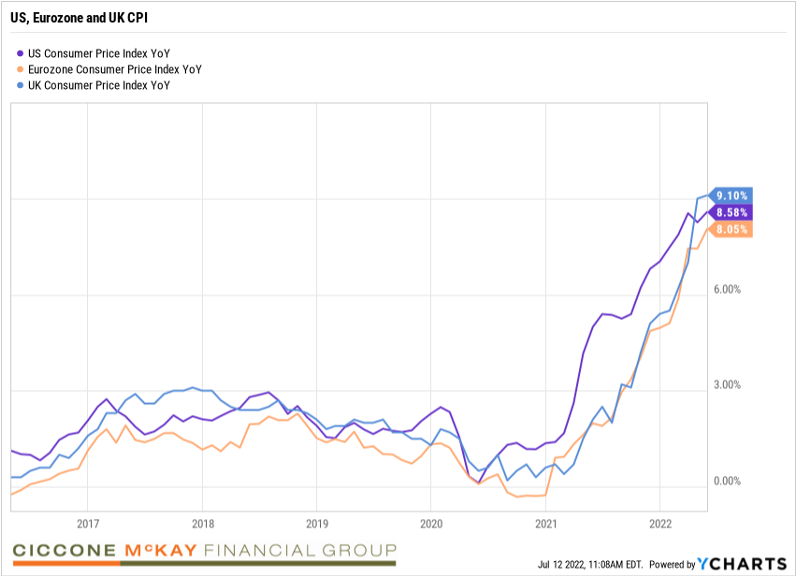 However, outside the United States, Canada and Europe, higher-yielding emerging markets and Japan have remained committed to fiscal ease. For example, China’s central bank continues to keep rates low. And the Japanese Central Bank is executing yield-curve control, artificially suppressing that country’s yield curve in the hopes of stabilizing the currency.

Despite central banks’ efforts, global inflation is likely to persist throughout the year – and that’s what will guide policy. The June Federal Open Market Committee (FOMC) meeting showed that the US Federal Reserve is committed to slowing inflation. The Fed will push policy rates higher, even as unemployment rates will rise. This stance will resonate elsewhere, with outlooks for the second half of the year remaining tight.

If we take a deeper look at Canadian inflation, we see that headline inflation of 7.7% was above Royal Bank of Canada (RBC) economists’ expectation of 7.4%. This was the highest inflation rate in four decades. As noted above, food and gas prices are surging. Other products, like furniture, which are exposed to the global commodity markets and supply chains, have also been driving inflation higher. RBC notes that, if you exclude food and energy, the core Consumer Price Index (CPI) is 5.20%. 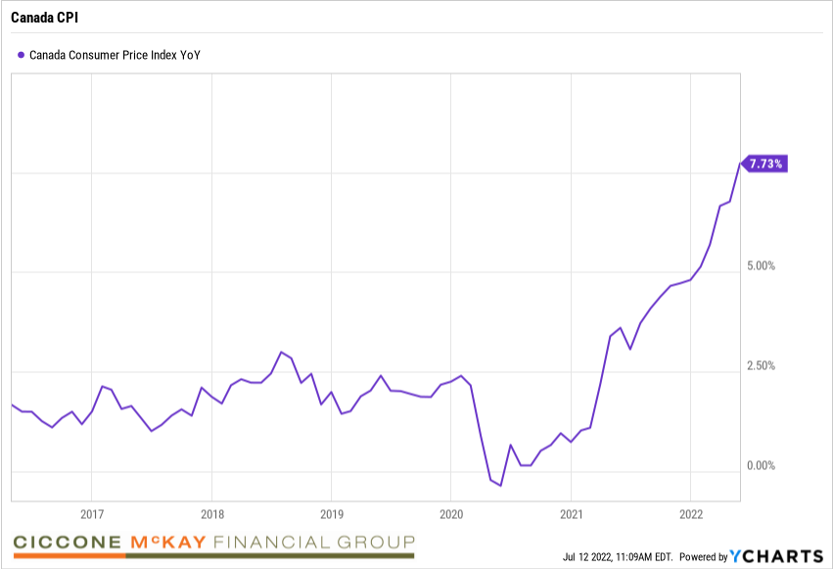 Inflation pressures continue throughout the Canadian economy. Again quoting RBC, 60% of the CPI basket is seeing price growth faster than the 3% top range that the Bank of Canada is targeting.

There are signs that supply chains are getting back to normal, as ocean transport times and shipping costs have recently decreased, as lockdowns in China ease. The war in Eastern Europe continues to have a negative consequence on commodity prices driving prices on, energy and agriculture, higher.

Despite the continued geopolitical turmoil, central banks globally will continue to tighten, slowing demand to tame the inflation momentum. Before Q2’s end, the Fed raised interest rates 75 basis points (bps), and predicted at least one more large hike will occur. In its June release the Bank of Canada said it expects inflation to go higher. The Bank also signalled it will match the Fed in raising rates by 75 bps. By now Canadian markets have fully priced in the Bank’s large inflation hike.

Canada’s Gross Domestic Product (GDP) slowed to 0.30% growth in April. This followed an average pace of 0.80% over February and March, when restrictions were easing from the winter COVID wave. The weakness is coming from goods-producing sectors, with annualized GDP currently on track to be around 4%.

Despite the GDP slowdown, the Canadian economy continues to operate at near-capacity limits, as unemployment rate is hovering at decade-low rates. However, with inflation remaining uncomfortably high, the Bank of Canada will likely act more forcefully to restore balance into the economy. RBC expects growth to slow significantly as the year progresses and higher inflation and rising borrowing costs start hurting household spending power. 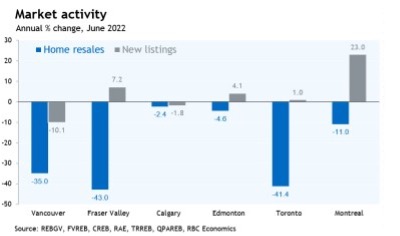 Vancouver, Toronto, Calgary, Montreal and other Canadian cities saw further falls in home sales in June as markets continued to normalize after the pandemic surge. The June slowdown was particularly noticeable in big boom markets. These regions have been more sensitive to early interest rate rises, due to the higher average prices of homes and larger mortgage sizes. Home prices in Vancouver and Toronto (Canada’s two hottest markets) saw sales in June fall 41% and 35%, respectively. Despite the drop in sales, the supply remains resilient. As well, the falling demand has pushed the sales-to-new-listing ratio lower.

In the US, the economy is on shakier footing than anticipated, as consumer spending, an economy’s engine, proved unexpectedly soft. GDP revisions released in the second quarter showed that spending grew 1.80%, down 3.10% from a previous estimate. The updated numbers also show a US contraction in economics output to annual rate of 1.60%. The slowing throughout the quarter is due to consumers having to battle elevated inflation plus higher interest rates.

The Federal Reserve Bank of Atlanta’s GDPNow tracker shows an estimated 0.30% annual growth in GDP for the second quarter. Economists surveyed by the Wall Street Journal have raised the US recession probability to 44% for the next 12-months. Again, the likelihood of a recession has grown as inflation pressure remains high, and as the Fed increases its hawkish stance.

The graphic above shows the Federal Reserve’s dot plot, which the central bank has used to signal its outlook for the path forward with interest rates. This picture shows the projections for the median year-end rate moving up 3.40%. The US central bank is the most important central bank and sets the tone that, historically, Canada and other central banks follow. As the FED raises rates to get inflation under control, we expect that the Central Bank of Canada, the UK, and the Eurozone will continue to follow suit.

The equity markets are experiencing the worst start to a year since the Great Depression. Investor sentiment is changing and the mood is bearish, as tighter global central bank policies and goods spending moderate growth.

It is important to note that treasury yields play an important role in both the economy and financial markets. The rise in yields affects everything, including mortgage rates (currently hitting decade highs). The yields rise is also a drag on stock prices, as the discount rate increases hurt the value of companies that rely on long-term earnings potential.

On the topic of earnings potential, according to JP Morgan, corporate fundamentals will remain resilient. Equity markets usually have large drawdowns during hiking cycles, with an average sell-off of 16% in the last 13 hiking cycles since 1954. The drawdown so far is comparable to that of 1961-1966 and 1986-1989, when oil, stagflation and high interest rates were persistent. At this point, anything short of recession in the US should surprise investors, as this broad sell-down has been very pronounced.

The Canadian stock market, while more resilient than its US counterpart, has joined in on the global weakness. Pricing that reflects economic damage continues as, again, central banks fight to bring the inflation rate lower. The S&P/TSX generated a -13.2% return for the second quarter. Energy, a bright spot for the Canadian market throughout the year, returned -2% for the quarter as prices stayed strong with limited supply. Also important to note is the continued difficulty Canadian financial institutions have been experiencing — this is key, as the Canadian market greatly relies on them. 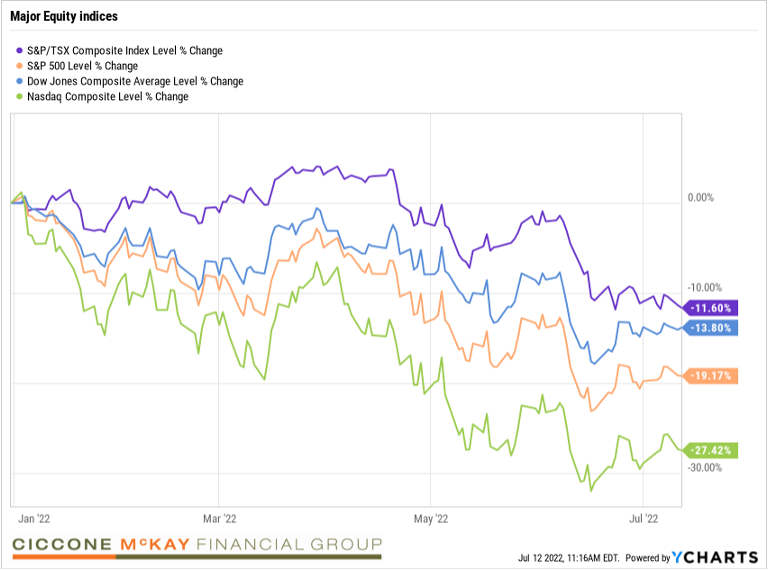 For bonds, global yields largely reflect the expectation for short-term interest rates set by the Fed. These bonds have staged one of the most rapid climbs in recent history as inflation has resulted in increasingly tight policy. Central banks have made rising yields an explicit goal, and as of late, while yields and prices move inversely, bonds have been rocked.

Many economists and analysts believe that the worst may be over. The slowing housing demand and shrinking consumer confidence indicate the interest rate hikes are already doing what they were intended to. We’ll keep monitoring all this for you – stay tuned!