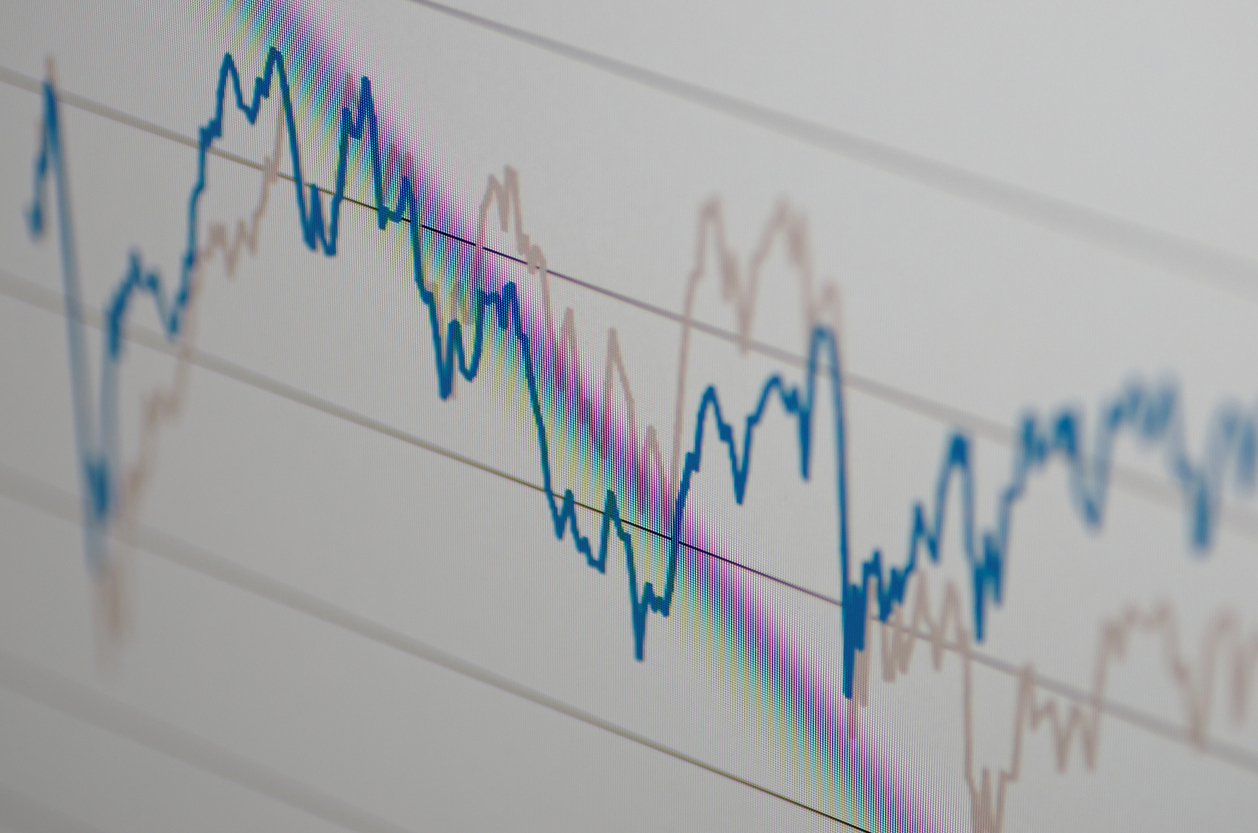 Why are yields rising and what does it mean?

Volatility has once again returned to the markets as of late. The choppy sessions, ironically, are not because of negative news that we have grown accustomed but rather due to magnitude of positive news—quicker vaccine distribution, additional stimulus, and the eventual re-opening.

This leads to an increase in the yields of longer maturity government bonds, such as the 10-year US treasury. When these yields rise and the Fed keeps short term rates low, it results in the yield curve steeping. Usually this means the economy is trending in a positive direction. However, the sizable move in rates has ignited fear that the Fed will lose control of economy and the yield curve control.

A bond is a contract where an investor loans capital to a government or corporation, with the agreement that they will be paid interest, on a set schedule, until the contract date has ended. Upon maturity, the investor is paid interest plus the face value. The interest, or the amount of income received annually, is known as the bond’s coupon.

The yield curve measures all the homogenous bonds the treasury has to offer over a long period of time. The horizontal axis displays maturity—when the bond will mature and return the borrowed capital. The vertical axis displays the yield—interest the bond holders receive.

What causes the yield curve to change shape?

The two primary factors that cause the yield curve to change shape are:

Currently, central banks around the world are keeping short term rates low due to high levels of unemployment globally and the uncertainty surrounding the aftermath of the virus. The consensus of central banks is that shot-duration yields need to stay low until at least 2023 to allow the economy to grow and encourage borrowing.

Market participants control the long end of the curve. When there is a positive outlook on the economy, investors pull money from long-term bonds, and place them in riskier assets such as equities. This causes the price of long-term bonds to fall and yields to rise. Bond prices have an inverse relationship with yield—when bond prices go up, yields go down, and vice versa.
Currently, investors are optimistic as they see the light at the end of the COVID tunnel. Savings rates are high, liquidity is increasing, and vaccines are being distributed. There is a lot of pent-up demand waiting to be circulated across the economy.

Historically, when the economy hits a rough patch, investors pull money from riskier asset classes and move it into income generating secure assets like government bonds. This demand spike drives prices up and yields down.

For reference, the Canadian ten-year bond in 1995 was a nominal 9%, today, as of March 5th, 2021, it is a nominal 1.50%. This trend is even more pronounced in the US. Low long-term rates have been a result of growth and inflation expectation for the economy coming down over time and central banks starting to buy longer term bonds to stimulate the economy.

So, what is happening with yields now?

There is currently a shortage in the demand for government bonds within the belly of the yield curve (5-10 years), this lack of demand is forcing bond prices lower and raising yields. The 10-year note is of particularly importance as it is a gauge for borrowing costs on things such as mortgages and corporate loans. In fact, the 10-year US bond, from December 4th, 2020 to March 4th jumped from 0.972% to a high of 1.550% - which equates to a 59% increase in bond yields. The sudden lack of demand in longer term government bonds, and the speed at which yields rose is unusual and caused some fear in equity markets. 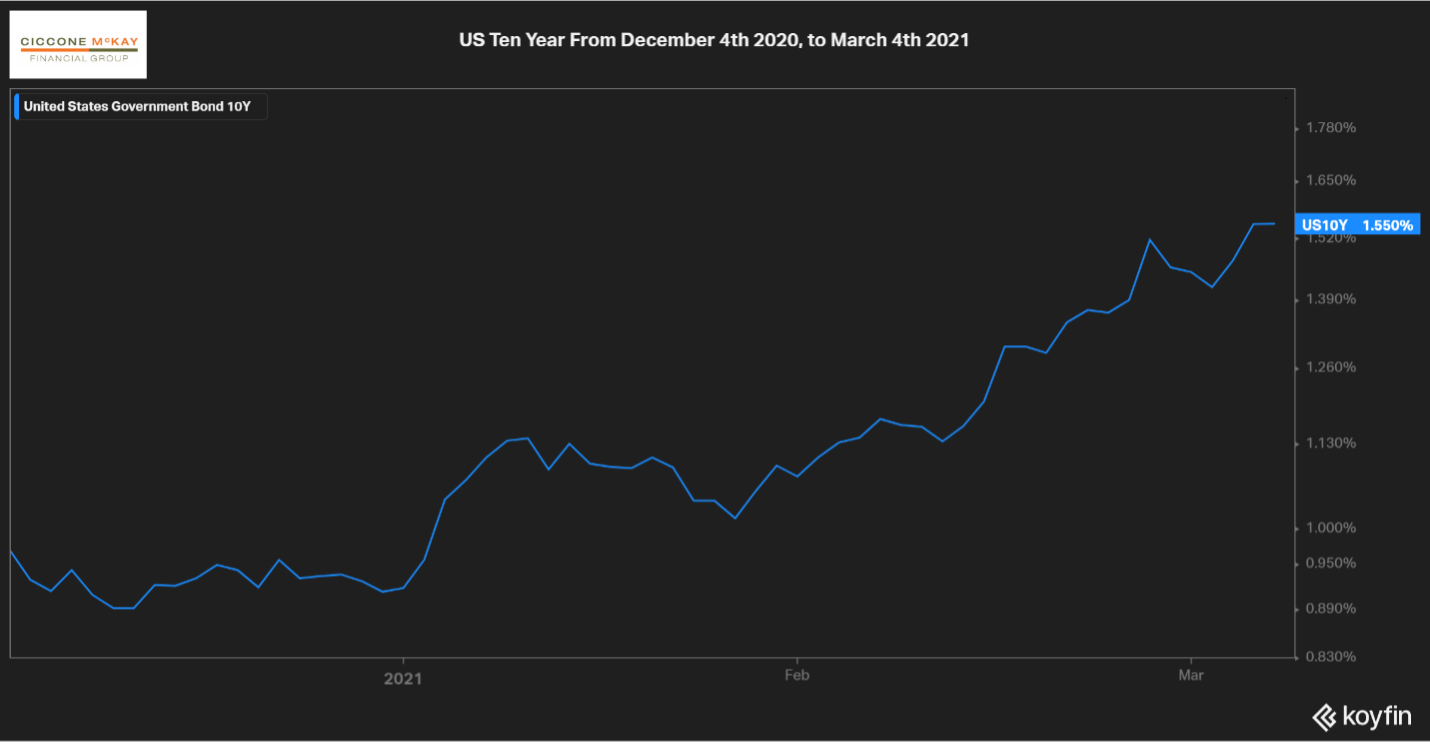 Why are interest rates going up?

Real economic growth and inflation are picking back up with a rise in economic activity.

For years inflation has been muted and stayed below the central banks 2% mandate. Since the financial crises in 2008, global markets have been flooded with stimulus. As the pandemic rolled through, the treasury and central bank acted in sync to spur the economy and prevent any further economic depression. However, the combination of large stimulus, consumer pent up demand and the roll out of vaccines could result in a major spike in inflation.

So, why has inflation and real yields caused the volatility?

First, the fear is that central banks will lose control of inflation if the recent move continues. This will drive longer-term bonds higher. Central banks around the world will raise short-term rates in an effort to slow inflation by reducing liquidity and increasing borrowing costs and slow economic growth along with it. However, Fed Chair Powell in his most recent press conference stated that inflation is not yet a concern and that they are committed to keeping rates lower for longer as unemployment remains elevated.

When there is too much money chasing few goods, it leads to inflation. By raising rates, the incentive to save money increases and reduces the amount of money chasing goods.
Scott Minerd, the Global CIO of Guggenheim Securities, shows that this spike in rates is nothing new. After the 1982 recession rates moved higher in 1983, US GDP grew 7.9% and in anticipation for inflation, yields rose to 10%, and peaked at 12%. Despite this, by 1986 the yields fell to 7%. He points to a similar trend in 2008, when yields were 2%, and by 2010 a rebound ensued and rates touched 4% before settling to new lows of 1.4% in 2012 (Minerd, 2021). If history repeats itself, higher yields should attract bond investors, forcing bond prices up and yields back down.

Second, rising yields, in theory, compress the valuations of equities, particularly for growth stocks. The forecasted future earnings get discounted at a higher rate, leading to lower present valueswe. This trend has transpired over the past few weeks as big growth tech names like Apple ($AAPL) have had their forward price to earnings ratio (P/E, a valuation metric) cut from a 34x P/E to a 26x P/E—representing a 24% change. The justification for high P/E ratios has been ultralow interest rates. As interest rates rise the risk-free rate is altered (10-year treasury rate is usually used as a proxy) and brings down the value of those cash flows.

But, rising long-term yields is a positive omen for investors, as it is a signal for an economic expansion. An economic expansion generally leads to higher corporate earnings which results in appreciating equity valuations. Yet, there is a fine line as at some point, high enough rates will make bonds more attractive relative to equities and drive capital towards fixed income.

As yields rise, it will be critical to see if it is caused by rise in inflation or real economic growth. If it is inflation, will the Fed be able to control it without slowing down real economic growth? Until these questions get answered, we should expect continued volatility in financial markets.

However, it is important to note that this is all part of the economic cycle. As investors, we should remember our investment goals, and the long-term nature of financial plans.  Over time, companies’ earnings tend to rise and that is the true long-term driver of stock and bond prices.

If you are feeling anxious about the markets, please ensure your investments are aligned with your long-term goals. If you want to speak with someone regarding your financial plan and investment goals, please call us anytime at 604-688-5262 or email us at info@ciccone-mckay.com.